There is an overgrown patch in the middle of my backyard that sprung up last month when winter began to gasp away. I remember it happened all of a sudden. The grass was not short—it rarely is in my yard, sadly—but subdued. More bohemian gardeners might have almost called it respectable. But then it rained one Thursday night, one of those surprisingly thunderous late winter gullywashers that sends the cats scurrying beneath the bed, and the grass woke up next to the fire pit on Friday morning with a wild mohawk and a raging sneer. Since then I’ve been ignoring the boisterous patch of turf like a shamefaced Baptist hiding in the back of the church. It feels too early still to tune up the lawnmower, a cantankerous old Snapper tractor that is probably busy popping its own front tires as you read this, and get down to work; but I know it’s going to have to happen if I want to stay on speaking terms with the neighbors and my dog, so I’m locked in a debate now between the slothful devil Chris on one shoulder and the industrious angel Chris on the other.

When I went home at lunch today I took the dog outside and saw that the patch had broken into an enthusiastic bloom of Spanish Needles. Most anyone you ask would call these weeds, and, well, they’re not wrong. But I’ve been reading gloomy articles about the insect apocalypse all winter, so I was a little happier than I should have been when I noticed that this patch in the yard was practically swarming with honeybees. My shame over avoiding the yardwork was transformed into respect and wonder for these little plants and the insects they attracted. Where would these bees be right now if I had cut the grass last weekend? 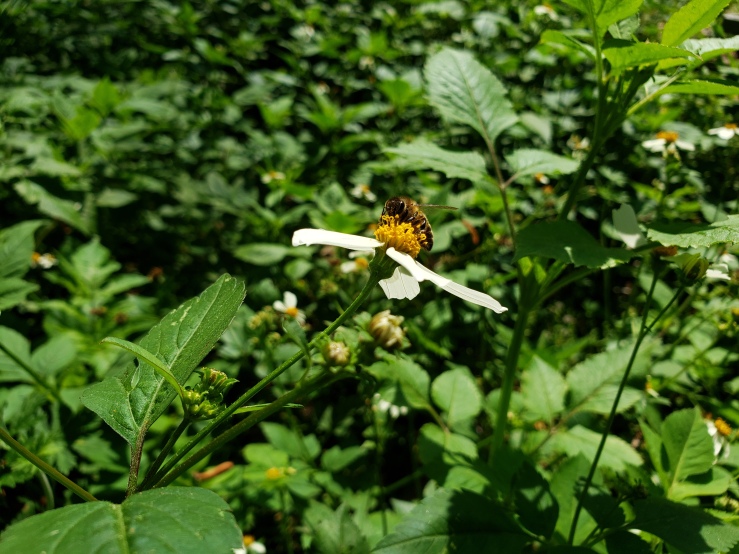 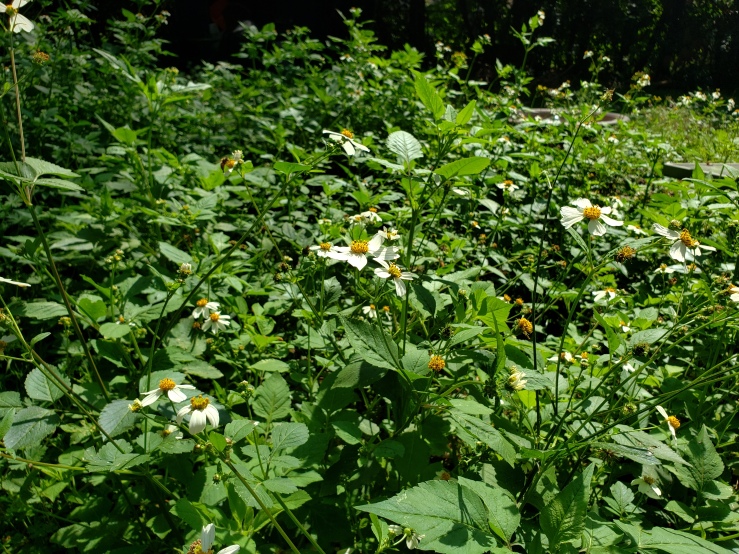 I’ve read that the best thing we can do to save the bugs, aside from advocating for the more thoughtful regulation and use of pesticides, is to promote an insect-friendly environment in our own backyard. These little Spanish Needles on the rebellious mohawk patch taught me a lesson today: sometimes that means letting go, just a little, and letting nature work. As insects, water, and other precious things dwindle, it’s more important than ever before to balance management needs against the needs of nature. Next year I intend to promote this little weed, to make it an intentional part of the yard, along with other insect-friendly plants.

Until then, I probably need to cut the grass.