Longleaf flatwoods in winter are not unlike a vast, quiet room. Forever walled by thicker growth—twisted oaks arising from dense leaf shag near the water and the shifting multitudes crouched in the dark corners or prowling the secret paths of the mixed hardwoods and sandy flat woods that took so much of their place after the turpentine men and loggers had their way with Florida—longleaf stands are open and still. They have little to hide. I stood in the forest hugging the banks of the Dead and Ochlockonee Rivers one afternoon in late November as a cold front settled over the fire-hewn landscape. It wrapped around the gummy trunks of the trees, shook the palmetto fans. It quieted the snakes and tapped on the sleeping shells of Gopher Tortoises just settling down for the winter. 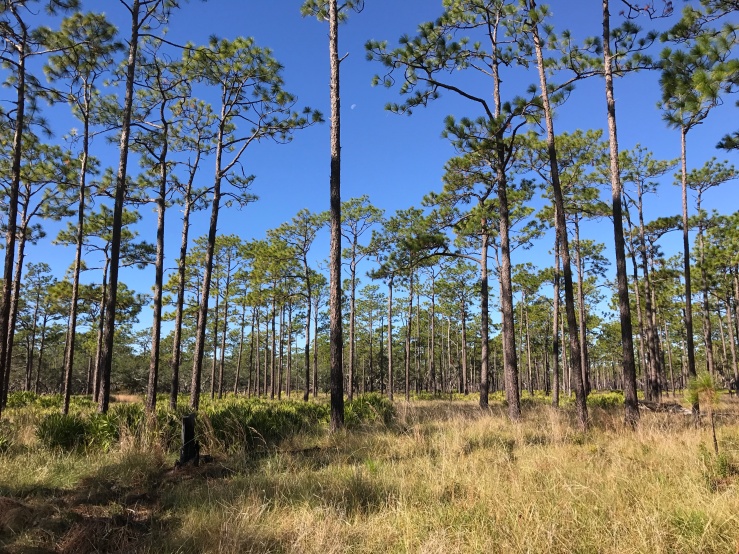 The deep still of the Longleaf forest in winter draws one’s eye outward, to the byzantine fringes, where the wind observes a lesser decorum, the cats and dogs and bears and birds and amphibians and insects and spiders and infinitely on cavorting long into the night and deep into the earth. The stately longleaf chamber abides the more studious: the meticulous surgery of the Red-Cockaded Woodpecker, the cautious footwork of deer, the carefully considered scurry of gray and white squirrels a long way up the papery bark of the trees.

In Stirring the Mud, Barbara Hurd reminds us:

“We love high drama in this country, mountain peaks and soap operas. They offer us something to tilt our lives toward—that triumph of ascent, that heart-pounding eye-to-eye intensity, that feeling of being wildly alive. Our nature aesthetics sound like movie reviews: We thrill to the surprising twist in the road that reveals the cast panorama, the unexpected waterfall. We canonize beauty that can be framed on the walls, in the camera, or on the postcard.”

Hurd urges us to look to the swamp, to “love what is muted and marginal, what exists in the shadows, what shoulders its way out of mud and scurries along the damp edges of what is most commonly praised.” But Longleaf in winter is neither exuberant nor muted. It discloses delightful things deliberately and sparingly. It is neither exalted nor condemned. It is a quiet room; the profound and stately fulfillment of space.