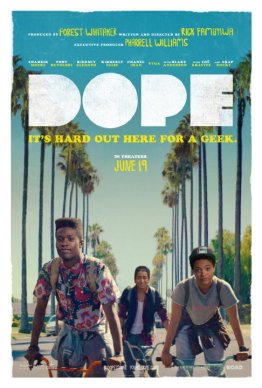 A month after its release, there’s a particular scene from Dope that still sticks out in my mind. It’s when Shameik Moore’s character Malcolm Adekanbi—a charismatic protagonist, I’ll just say here at the outset—is frantically driving to meet a Harvard alumnus as part of his college application. He’s driving away from an impossibly, hilariously complicated situation to one that is even more outrageous and complicated. Along the way, he sees someone completely unexpected, however, in a completely unexpected situation. The camera pans to his face. Dumbfounded, he asks aloud: “what the fuck?” The audience asks it with him before he (and they) are inexorably carried onward, further into a story rich with anomalous characters and ridiculous situations. The scene I remember is a fleeting moment, unnecessary to the story, but that question—Malcolm’s bewildering and fleeting encounter with the wholly new and unexpected—captures Dope’s cultural meanings more than any other could.

First, the film itself. Dope is a bildungsroman for the twenty-first century. Protagonist Malcolm Adekanbi is a product of Ira Berlin’s fourth great migration—a Nigerian-American geek living in a rough section of Los Angeles—where he and his friends Jib and Diggy share a love of early-nineties hip-hop and play robopunk songs in their band, Awreeoh, while they finish their senior year of high school. Malcolm is ambitious. He plans to attend Harvard University, on one hand, and his college application frames the narrative. Much of the story takes place at school and in classrooms. But Malcolm wants to be “dope” on the other hand. An encounter with drug dealers and street violence offers Malcolm an inside look at his neighborhood and his own strength. Stuck with a backpack full of molly, death threats and the danger of arrest hanging over his head, and looming standardized tests, Malcolm (and Director Rick Famuyiwa) must resolve the tension between his ambitions in order to survive. Famuyiwa resolves them in style. Dope is engaging, warm, outrageously funny, beautifully rendered, and vibrant.

While I’d like to take credit for reading Heidegger closely and taking detailed notes, the quote that opens this review is the epigraph of postcolonial scholar Homi Bhabha’s 1994 book The Location of Culture. In The Location of Culture, Bhabha argues that the re-iteration and repeated translation of hegemonic cultures associated with colonialism—or “globalization,” if that term is more palatable—leads to the formation of new cultural identities in the “interstices” between opposing social or cultural forces. Because they can only translate the received hegemonic wisdom of nation, race, gender, and so on for themselves, minorities and oppressed populations create “hybrid” identities that transcend these simple categories. Globalization and hybridity go hand-in-hand. Forced to puzzle over entirely new identities and situations, colonizer and colonized alike must both sometimes throw their hands in the air and ask, like Malcolm Adekanbi, “what the fuck?”

Dope is about hybridity. Malcolm crosses the boundaries between “geek” and “dope”; between generations, marrying his love of nineties hip-hop to his skill with the tools of twenty-first century cunning, like bitcoin, digital money laundering, and the dark web; between poor and affluent; between East Coast and West Coast; between African and African American. Without entirely new categories, it is impossible to pin Malcolm down and label his identity.

Malcolm’s friends and enemies demonstrate the futility of creating new labels. Drug dealer and gang member Dom quizzes his street counterparts on logical fallacies; Malcolm’s lesbian friend, partner-in-crime, and bandmate Diggy crosses the boundaries between genders; friend Jib—who claims to be 14% African—and stoner hacker Will—emphatically not African but unapologetically crass in his use of the N-word—cross the boundaries between races. Even Malcolm’s band, Awreeoh, crosses the boundaries between punk rock and hip-hop with a subtle nod toward race. Situations, too, cross the boundaries of class and morality: upper-class acquaintances struggle in vain for street cred; Malcolm is sympathetic and good, but he sells drugs to earn his way into the Ivy League. Hybridity abounds.

And it is wonderful.

Dope crosses boundaries without turning the mirror on itself and preening for attention. Its characters navigate a world of ambiguous definitions and unsteady moorings without sinking beneath the onerous weight of racial awareness and class-consciousness. Their awareness feels more real, more like a tool to adapt to the world as well as shape it to their own ends, rather than the self-destructive rebellion or acrobatic accommodation a previous generation of storytellers demanded from their characters. Famuyiwa—perhaps uniquely positioned to comment on hybridity by his location within the Nigerian diaspora—captures the fracturing of the twentieth-century’s colonial order better than any filmmaker in recent memory. If millennials exist, this is surely their film.